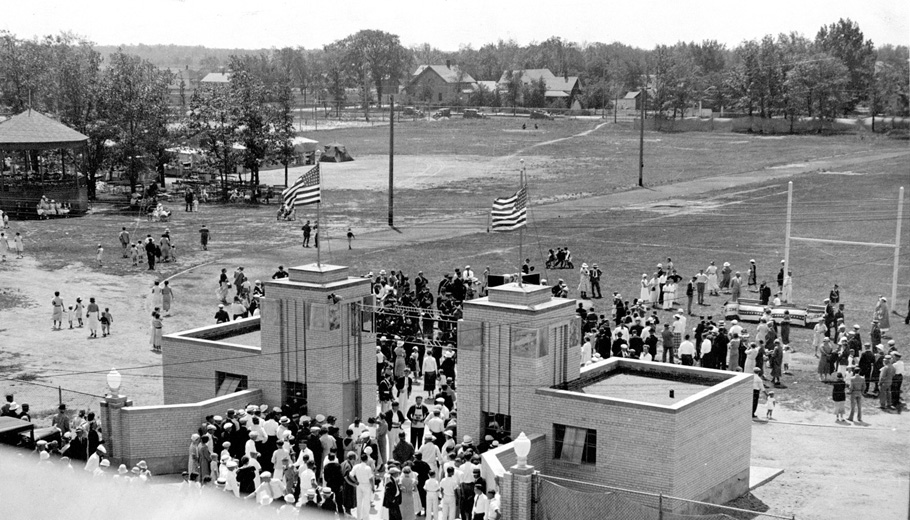 <
►
>
Fire Chief A.C. Miller throws out the first pitch of the game, as the Chicago Fireman baseball team play on Lincoln Athletic Field in 1934.

While the Wisconsin Rapids Rafters begin their 11th season on May 31, the team’s home has a long, storied history of providing entertainment while showcasing talent from all over the country.

The grounds of the Wisconsin Rapids Rafters’ Witter Field were originally used for a horse-racing track, built on the site by Alexander Worden in the late 1870s. The grounds were later sold to the Wood County Agricultural & Mechanical Association, who ran a fair on the site for about two decades.

The land was sold to the city of Grand Rapids, who built a high school on the site and developed Lincoln Athletic Field. In 1926, the field was designated for general community use with a goal to create “the finest community recreation grounds in the entire state of Wisconsin.”

Infused with a large donation from area businessman, Isaac P. Witter, and city and school district funds, a south side grandstand was added to the park.

In 1933, the common council approved the 1934 budget, which included financing of an entrance to the park, along with a bandshell. The entrance included restrooms, a ticket booth, shower rooms, and a furnace room. The new amenities were dedicated during the city’s Fourth of July celebration that year. At the end of the year, the park reported 50,000 visitors, with about 10,500 spectators there to see the city’s baseball team.

Lights were added and the park was renamed “Witter Field,” in honor of benefactor Isaac Witter, as the field continued to grow larger and larger crowds.

However, the open access of the field lent to spectators taking advantage of the set up. Cars lined an area on Chestnut Street and around the field to watch from the safety of their vehicle. Officials reported about 30-40 vehicles watching from outside of the fence on any given night.

It was also reported that several hundred more spectators than the number passing through the gate were often observed in the bleachers. Visiting clubs sometimes accused the club of playing with paid admission totals.

The same year, the park became known as Witter Field, the Chicago White Sox started an affiliate in the city called the Wisconsin Rapids White Sox. Spring training for the team began at the athletic field on April 27.

Among the players under contract were 12 pitchers, two catchers, six in fielders, and nine out fielders, including Carl Hopp and Earl Harding.

But activities thousands of miles away would take the “boys of summer” far from central Wisconsin and put a pause on affiliate operations in Wisconsin Rapids.